The days of the black swans…

MAGDA 41 years old
„Iza. I am like that black sheep in the family.
I’ve always been strange, different… I broke the mould.
I wasn’t accustomed to people who drink every weekend.
My parents, my cousins’ grandparents all like that.
I always stayed away, kept away from…„

TOMEK 36 years old.
„I have always been more sensitive than my family.
They are strict.
I was attracted to art, languages.
When I discovered that I was homosexual, they cut me off completely.
For years.
For what would a father in a hospital, where he is a chief, say to others…”

When I started working with Magda, it turned out that thanks to her work on herself, her family
stopped drinking. It happened for the first time during holidays.
Her mom started practicing yoga, and her dad (after a heart attack) asked for those books about
healthy eating that she had always had at home.

Tomek had a similar experience .
He went back home after a serious leg fracture.
The perspective of half a year of rehabilitation was looming over.
His father ( the orthopedic surgeon) knows what to do in such cases.
Tom, thanks to the practice of yoga and mindfulness, reached fitness in 60 days.
Intrigued, my dad started to explore what it is…
Mindfulness.
He started going to breathing sessions and it turned out that the terrible stress… is letting go.
He came closer with his mother.

Space for communication opened up after years of freezing stage between him and his wife, and
then he found his way to his son.

After Tomek’s third therapy visit, harassment in the family came up.
Sexual harassment of boys.
Tomek went to see his father.
He asked directly and in the first sincere conversation his father told him that he had been sexually
abused as an altar boy by a priest. Both burst into tears – father and son.
That’s why his son’s homosexuality brought up the blockades…
In a close relationship with men.
It wasn’t about the son.

YOU ARE NOT A BLACK SHEEP.
When it’s hard for you in your family, but until…

When you go your way and follow your heart after all.

When your way is difficult but love for your loved ones does not die, because you have the strength
to find in yourself understanding and agreement in relation to their way.
Different from yours.

When, despite the pain of rejection by your environment, you have consented to your own from
them, and theirs from your otherness.

This is a difficult way, for chosen individuals in your family.
Special individuals by their inner strength, sensory sensitivity, perceptiveness and emotional
intelligence beyond the measure of the general public.
However, such people do not feel special.
They have humility to the way they go.
A special kind of ordinary and ordinariness, and respect for life and its manifestations.

When they create a business, they cooperate, it is only in accordance with their feelings.

They will not survive in structures where human beings and natural laws of cooperation are not
respected.
These are also people who, by entering a certain environment fill it with their energy.
They introduce unnoticed changes.
They simply are, and what emanates from them attracts crowds.

YOU ARE A BLACK SWAN,
not a black sheep if you recognize these qualities in you.

And I have been observing this phenomenon for several years in my work and in my life.

This term has been in use in business for some time and was initiated by the famous book by Nassim
Nicholas Taleb „The Black Swan. The Impact of the Highly Improbable”.
To describe phenomena that nobody would even think of.
Scientists, for many years, did not expect that swans could have a different color than white.

Similarly, no one in a family with specific habits expects a birth of someone completely different from
them.

STRENGTH FLOWS FROM THE FAMILY

Actually, the power of a person being a Black Swan flows from his or her own family.
Because every family as a whole, every now and then, when it reaches a dead end, needs to change.
Fundamental changes.
Refreshment.
Renewal.
Expanding boundaries.
Finding new ways.
Like a flat, a house, a car.
And such a Black Swan is like a fresh breath.
Like a renovation for a family.

I noticed when I watched thousands of people in their work, that the times of the Black sheep are
coming to an end.

The Black Sheep had different tasks.

BLACK SHEEPS
were somehow to acquire new lands, information about life, new habits and customs….
And so, at a distance, they had to permanently change what was hardened in the family, because the
morphic field works at a distance and it does not matter to the field, what Rupert Sheldrake
researched, where the animals, plants or relatives are.
Entering a higher level by one member of the family upgrades others to that level too.
Or it makes it much easier for them.

Usually it was the children, or the grandchildren of the Black Sheep, who had a deep need to return
to the lands of their ancestors and to bring what was refreshed, new, healed.

THE DIFFICULT PATH OF THOSE CHOSEN BY THE FAMILY

I often hear „But why me…”
„Brother and sister have easier, different path”.

This is your strength and this is the way your soul has to go.

What you learn in this effort, your body has to learn too.
And remember that only people who have the ability to cope with difficult tasks are put to such
tasks.

And when you look at your hardships as if they were your own, or you choose to go through them,
you will change the perspective of looking at the burdens that accompany that process.

Subconsciously we choose everything we experience.
Absolutely everything.

Exactly the same way as we enter a grocery store and choose 6 or 10 out of thousands of products.

We also choose the phenomena, people, friends, partners, working with such a boss and not with
any other boss like in a shop.

Decisions are usually made in 0.2 hundredths of a second.

And how do we choose in the shop?
You usually choose what you know well.
For 10 known products you will choose 1 new one if it is similar to those you know so that you will
be able to trust it.

BLACK SWANS
They ask „why it is so difficult for them…” only at the beginning of their journey through difficulties.
In a much shorter time than the Black Sheep, they move on to make their lives more peaceful,
valuable, better for them…. But also for others in a circle.

BLACK SHEEPS PAID ATTENTION MAINLY TO THEMSELVES
because to be guided and powered by hatred in life, cutting off from one’s roots is very exhausting in
terms of energy.
That is why Black Sheep going through life in such a way had the strength only to take care of
themselves.
They were accompanied by great tension and very often a high level of fighting with others for
survival.

BLACK SWANS
…cooperate.
They look for opportunities for cooperation and have a need to make sure that apart from the fact
that they are doing well, everyone they meet on their way is doing well.
They are full of empathy and understanding at a deep level without learning it anywhere.

The world today has a great need for cooperation.
Integration.
A holistic view of every phenomenon.

Black Swans, with their sensitivity to others and to the needs of the world, are both the effect and
the response to these sociological changes and their rapid pace.

And whether you are a Black Sheep or a Black Swan, you carry within you a special power that flows
from your family.

What you do with it is up to you.
Every day we make some decisions.
Some of us are less aware, others more.
Every decision can close some doors behind you and open new ones.

See in yourself today which doors are worth closing and which are worth opening.
Sit down and close your eyes and breathe this picture in.

Have a beautiful meeting with yourself.

© All rights reserved.
Making available and copying possible only in full and only by giving the author of the text.
Translation: Marzena Adamus 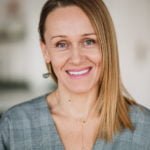 Therapist of Hellinger’s Settings, coach and personal development coach, working with dozens of people from Poland and abroad every month and accompanying them on their way to achieve joy and full personal and professional life.

Therapist of Hellinger’s Settings, coach and personal development coach, working with dozens of people from Poland and abroad every month and accompanying them on their way to achieve joy and full personal and professional life.